Just bits and pieces of odds and ends today...
There was a round-up of the ponies Friday and Saturday on the Virginia end of Assateague.  They got their third doses of the new equine pythiosis ("swamp cancer") medication, in hopes that it proves to be a potent vaccination for all equines around the world. I haven't gotten a report regarding the northern herds, but it seems that we have lost a foal - Kimball's Rainbow Delight was spotted with a chestnut - possibly palomino - foal on May 19th.  Other than the original sighting and photo, there have been no others.  Rainy came in with her herd, but without a foal yesterday afternoon for the round-up.  Everyone else in the southern herds were in great shape.  DSC Photography was in "Facebook Jail" yesterday because they were apparently reported as "spammers" to FB, and they weren't been able to up-load new photos of the round-ups and the ponies in the pens, or on their way out yesterday.  They were back up and posting again at midnight.  (Thankfully!) 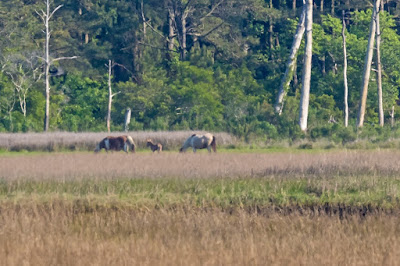 Now I need to grouse....   I just spent the afternoon looking at images placed on the Fine Art America website under two categories - one, just the word Chincoteague; and two, just the word Assateague.  Now, the words "Chincoteague ponies" are used pretty mush to describe any pony born on Assateague Island - ponies run wild in both states, Maryland and Virginia, on Assateague.  People also call the ponies born there "Assateague ponies."   Ponies born in Virginia are given vaccinations, have blood tests drawn, and are micro-chipped; and there is a specific registry for them - the Chincoteague Pony National Registry.  This is not done for the ponies in Maryland.  They receive no veterinary care, but are assigned an alpha-numeric ID number and are named by the highest bidder in on-line, and, occasionally, public bids. There is a difference between the ponies owned by the Chincoteague Volunteer Fire Company in Virginia, and the ponies that roam free with no care and are over-seen by the National Park Service in Maryland.
The people who post photos on the Fine Art America page apparently don't do their "homework."  And one of the photos was down-right frightening to me...  The photo was titled "I Am Wild" and it showed a young woman, sitting with her legs curled to one side, with her hip less than 6 inches away from the hind feet of a wild pony asleep on Assateague National Seashore in Maryland.  The girl is smiling prettily for the camera as she sits beside the hooves of a chestnut stallion named Corky.  What a complete and total idiot!!!  People are supposed to give the ponies a buffer zone of 50 to 120 feet.  She could have been kicked, trampled and/or bitten.  Then (I'm certain) it would have been the pony's fault, according to her, her friends and family.
Other people assign their own personally-decided names on the ponies.  I was amazed to see, under the Assateague heading, a photo of Surfer's Riptide, dated 2012, where he was named "Slash the Pony" by the photographer.  There are multiple shots of Stevenson's Dakota Sky under the title of "Pony with the Copper Mane"...  Some ponies that have passed away in Maryland are listed with the names of Savannah and Squire, but none of the ponies there were named those names.  One of the ones that made my jaw drop was a hugely muscled palomino with a large white blaze, that a single photographer had posted as "Portrait" and "Big Red" (?) , and described the palomino is a wild Assateague Island pony.  That pony (or horse) is standing among a large growth of bamboo, which doesn't grow on Assateague, and I can definitely say that it never was a wild pony on Assateague.
There were two other things that drew my ire...  Photos labeled as being taken on "Chincoteague Beach," and pictures and drawings of the Assateague Lighthouse that are also labeled as "Chincoteague."  First, there hasn't been a beach on Chincoteague since the early 1970s, when the south end of the island was developed.  And secondly, the Assateague Lighthouse is solidly built on Assateague Island, and always has been.  It is not on Chincoteague, but can be viewed from Chincoteague.
Maybe people are confused because the Virginia end of Assateague is both the Assateague National Seashore and the Chincoteague National Wildlife Refuge.  The Assateague National Seashore is run by the National Park Service; the Chincoteague National Wildlife Refuge is run by the National Fish and Wildlife Service.  They are two intertwined entities.
But Assateague and Chincoteague are not the same islands.  Assateague is the very long green and orange island at the top of the map below.  Chincoteague is the small tan blob close to Assateague, and the right side of the map.  North is to the left...